Ezra Furman finally takes her first steps back towards the ordinary life we all crave as she performs a full live solo set in the magnificent confines of Boston’s Museum Of Fine Arts. Ian Corbridge checks in for Louder Than War and finds true inspiration from the experience in our hour of deepest need.

In a year which has continued to challenge the creative arts and both inhibited and reshaped the art of live performance, we have at least been blessed by innovation in a way we could not have imagined. And with good fortune Ezra Furman has not only provided us with the magnificent soundtrack to the Netflix series Sex Education earlier in 2020 but has also performed a consistent stream of live songs through her Facebook channel, demonstrating her wide ranging and eclectic taste which have inevitably fueled her consistently high quality of songwriting over recent years. But with the ever growing frustrations of having to cancel or postpone the vast majority of her 2020 touring schedule, Ezra set about plotting to bring us a very special and intimate solo show with just her and her guitars and the songs she’s spent her life crafting.

The setting for this performance was the magnificent Museum Of Fine Arts in Boston. The inspiration for this came from Ezra’s hero, rock’n’roll minimalist Jonathan Richman, who referenced the building in The Modern Lovers classic song Girlfriend. The prospect of hearing the performance of some great songs filmed against the stunning backdrop of the Museum’s galleries was certainly something I could not miss.

As I awaited the start of the live stream, my mind drifted back to the start of my own journey with Ezra on a cool October evening in Manchester in 2012. An expectant crowd of Nada Surf fans had already gathered in good numbers in the intimate setting of Academy 3 when the diminutive figure of Ezra Furman took to the stage in a denim jacket with an acoustic guitar strapped over his shoulder. It was a nervous entrance with Ezra, previously completely unknown to myself, having an almost apologetic look on his face as he performed the half hour support set. But it soon became clear to me that this was no ordinary support set.

As Ezra worked his way through that short set, I was struck by the paradox of someone appearing so frail and nervous in front of an audience yet delivering such powerful and assured messages through his songs. I found myself wondering if this is how a youthful and inexperienced Bob Dylan would have portrayed himself in those early days performing in Greenwich Village, not appreciating how his songs would resonate with so many people over so many years to come. I had no doubt in my mind that even before Nada Surf hit the stage, this had become a special night and I had established a new and crucial musical reference point in my life.

Fast forward through a period when Ezra’s onstage and offstage persona began to fully recognise Ezra’s bisexual and gender-fluid status, I could only wonder how the rock’n’roll outsider would feel performing in the presence of some of the finest American art of the 19th century that is displayed on the walls of the Boston Museum. However, I was reassured when Ezra commented that “I think my stuff can measure up to theirs” and I had little doubt that it would.

As the live stream commenced and Ezra moved in to take her place and pick up her electric guitar, there was a further overlaying intermittent commentary by Ezra which made it sound at times like she was conversing with herself. As Ezra explained how important the medium of a song is in her life and “how we all belong in a song”, it was clearly her intention to make moments for others as her favourite artists have made moments for Ezra. Again, I had every expectation that this aim would be fulfilled.

The first song, The Queen Of Hearts, from The Year of No Returning, is filled with a message of desperation and frustration that lies within many of Ezra’s songs. This is followed by Haunted Head, from Perpetual Motion People, which explores other familiar topics such as mental illness and self-destruction. In America, from Twelve Nudes, is also delivered with a clear degree of anger and frustration with Ezra citing it as the “national anthem for my flailing nation state America”. As ever, Ezra is right on point with her message.

I Wanna Be Your Girlfriend was dedicated as a “song for trans women” with a message that whilst physical appearance may not always fit the ideal image, it is important to recognise how you make people feel. The song is delivered with a strong sense of conviction and intense emotion in her voice. This was followed by Love You So Bad, from Transangelic Exodus, which was used as a trailer for the Sex Education series.

As Ezra put down her electric guitar and moved into a different room in the museum, she explored her own contradictions as a “catastrophic introvert” who had her own private world which people don’t know about. However, this was set against the realisation that if you give Ezra a microphone and a chance to say things her own way, it is evident that this is what she wanted all along. And then launching into Watch You Go By, now with an acoustic guitar, she proclaims that “I’ve got a bright future in music, as long as I never find true happiness” which is the reality that has inspired many of the great melancholic ballads over the years.

With an angry and strident acoustic guitar, Dr Jekyll & Mr Hyde is full of self-fear whilst exposing the frailty of beauty, and Transition From Nowhere to Nowhere seems so relevant to current times as we lurch through different phases of lockdown. In a similar vein, Hour Of Deepest Need so eloquently focuses the mind on a lack of independence which we are all feeling right now.

The Refugee, taken from the 2016 six song EP Big Fugitive Life, turns the focus towards the world refugee crisis and is inspired by Ezra’s grandfather who came to the USA from Poland as a refugee of the holocaust. And then whilst Ezra moves to another room and returns to the electric guitar, she raises the challenge as to who would dare to sing whilst the world is burning, and this sense of inner conflict is reflected throughout God Lifts Up The Lowly. Further inner turmoil and a search for self-love is explored by Body Is Made, a classic song from Transangelic Exodus.

The only cover song of the night is I Can Change from LCD Soundsystem which is a “song for the emotionally dysfunctional”. Ezra’s focus then returns to the struggle against the threat posed by the rich hyper-capitalists through Trauma. 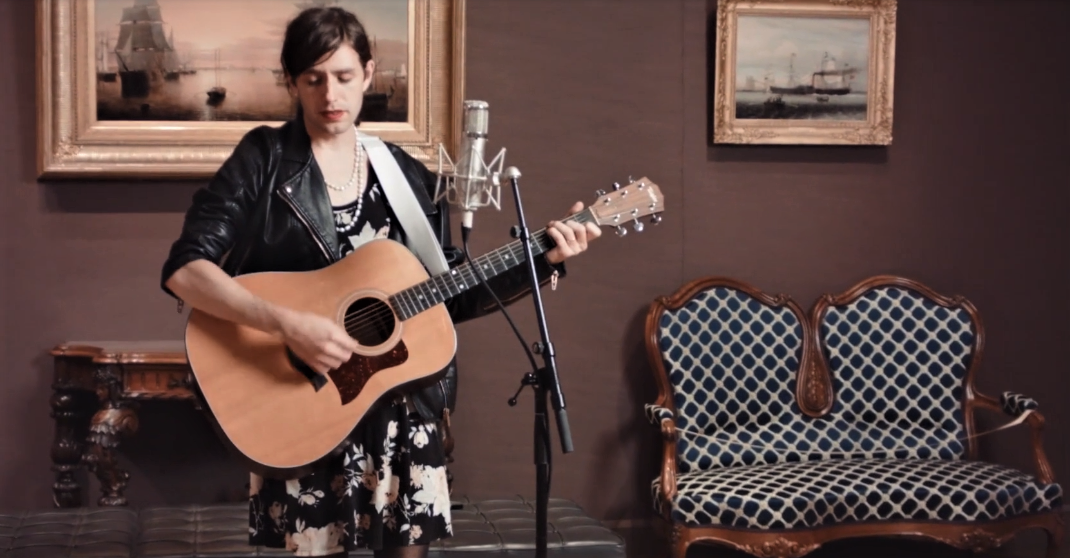 One song that always felt indispensable in an event and at a time such as this was surely Ordinary Life from Perpetual Motion People. As we all continue to stay at home more than ever before and we become more acquainted with the mundane, fear, deep depression as well as the boring and exciting in ever changing measures, this is very much a rallying cry against that boredom. Ezra’s message is essentially that if you are bored of life then you might just have to change it. The closing song, Cherry Lane, taken from the 2013 album Day Of The Dog, was dedicated to anyone who is homeless or at least feeling homeless.

Once again Ezra Furman delivered an inspired and thought provoking performance as our human frailty is exposed within the jaws of history. Just as Dylan’s songs have crossed paths with almost every avenue of my life over so many years, Ezra’s distinctive songwriting style and witty and insightful lyrics have never seemed more relevant than they do now. Truly a performance for our time, right here and right now.

All words by Ian Corbridge. You can find more of his writing at his author profile.

Cadet Carter’s ‘The Best Part’ Is A Real Cruncher | News