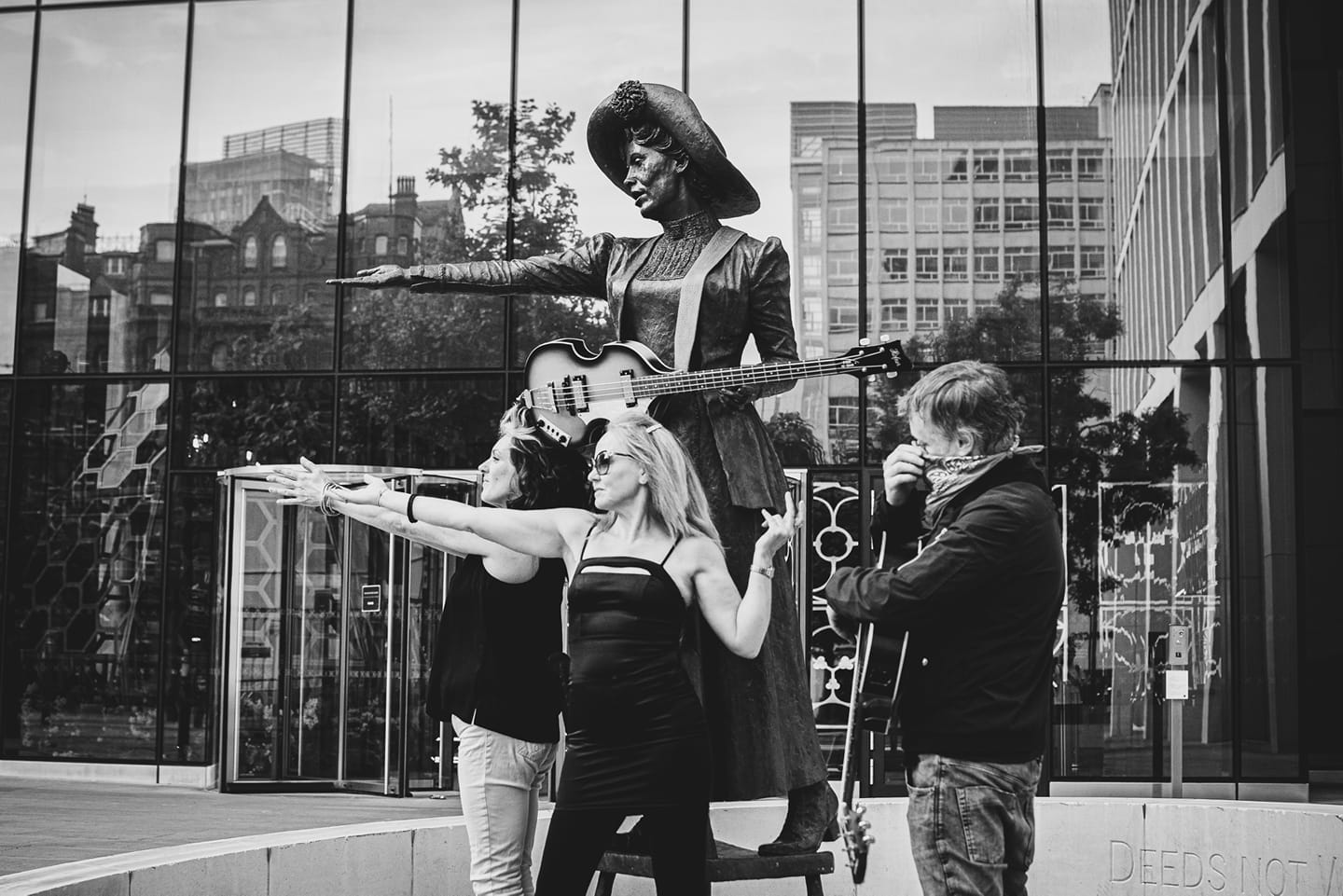 Bracing the very depths of the pandemic, Cold Water Swimmers come storming back with an all-new summer anthem – Be My Sunshine. Not content with simply recording the track during lockdown, they hit the streets of Manchester to shoot an iconic video. Nigel reviews for Louder Than War!

It’s a tough time for bands and artists. With no way of gigging, some have been forced to quit; the rest struggle on through shaky zoom style performances, reaching a fraction of those who would have come to their gigs. Earnings have been wrecked and it looks like it’s going to be some time before we get back to normal, whatever ‘new’ normal looks like.

How refreshing to see one band soldiering on through. Initially recorded as an acoustic track and uploaded to Facebook, Cold Water Swimmers’ Be My Sunshine (each part having been recorded at a distance) has been assembled and given the full studio treatment by Simon (Ding) Archer at 6DB in Salford.

Fresh as a slice of a lemon dropped into a G&T, Be My Sunshine fizzes with summer goodness. Poppier than the band’s previous material, the song is a poignant reminder of how the current situation is getting to us, “Don’t let the thoughts in your head stop you from doing what you want to do”. Frontman Chris Bridgett (Ex Dub Sex and The G.O.D.) has always written from the heart but never so revealing, where the stress of lockdown is clearly having a negative affect. The answer? Write an uptempo pop song full of hope!

The track comes with its own video shot around Manchester from The Northern Quarter across to St Peter’s Square, where Emmeline Pankhurst gets in on the act! There’s even a washboard in the mix!

What The Band Says:

Imagine The La’s jumping in a van with The Coral, hitting the M62, only stopping at Birch Services to pick up The Stooges (who’ve gone acoustic) and The Velvet Underground, then heading to Manchester to jam Buzzcocks tunes on the hottest day of the year, in a country rock ‘n roll style outside Central Library and you’ll get the vibe!

Be My Sunshine is the first release from the hotly tipped Manchester trio in 2020!

“it’s a 3-minute pop song, a dark one but a pop song none the less – It’s our lockdown gift” – Chris Bridgett

Add to your Spotify Playlist here: Be My Sunshine

Watch the exclusive premiere of the video for Be My Sunshine Here:

The track debuted on my Radio Alty show on June 10 – Listen to the whole show here: Radio Alty.

Words by Nigel Carr. More writing by Nigel on Louder Than War can be found in his Author’s archive. You can find Nigel on Twitter and Facebook and his own Website. Photo:© by Trust A Fox whose website is here: Trust A Fox, Facebook

Zara Tindall ‘so pleased’ she didn’t have a royal title

Zara Tindall 'so pleased' she didn't have a royal title