One or two readers have been less than enthusiastic about this big, fat Washington memoir.

‘Bolton’s book, which is getting terrible reviews, is a compilation of lies and made-up stories, all intended to make me look bad,’ wrote one early reviewer, Donald J. Trump. ‘Many of the ridiculous statements he attributes to me were never made, pure fiction. Just trying to get even for firing him like the sick puppy he is!’

‘Bolton’s book, which is getting terrible reviews, is a compilation of lies and made-up stories, all intended to make me look bad,’ wrote one early reviewer, Donald J. Trump

Later that same day, Trump ramped up his attacks on the author, describing him as, ‘A disgruntled boring fool who only wanted to go to war. Never had a clue, was ostracized & happily dumped. What a dope!’

US Secretary of State Mike Pompeo has been equally snippety, calling John Bolton ‘a traitor who damaged America by violating his sacred trust with its people’.

Of course, Pompeo’s fury may well be fuelled by embarrassment. After all, Bolton had repeated in print some of the rude things Pompeo had said about the President behind his back. On one occasion he had apparently passed Bolton a note that simply read: ‘He is so full of s***.’

Small wonder that Pompeo has now turned on his former colleague, accusing him of ‘spreading a number of lies, fully-spun half-truths and outright falsehoods’.

Yet it had all started so happily. In the early months of his presidency Trump had been keen to recruit Bolton to his team, largely, it seems, because he so enjoyed his hawkish pronouncements on Fox News. He invited him into the White House for a chat about ‘the full range of world issues’. At one point during their talk the President turned to his son-in-law, Jared Kushner, and said: ‘This is so great. John sounds just like he does on television. I could just keep listening. I love it.’

On this basis, he ended up offering Bolton a job as one of his many assistants, but for the former diplomat it was ‘a complete non-starter’. He was determined to be National Security Advisor, and was not prepared to settle for second best.

His stubbornness paid off. Fifteen months into the Trump presidency he got the job he wanted. ‘You know, John’s been preparing all his life for this job,’ Trump told President Macron when they met him. ‘He was a genius on Fox TV, you know, and now he’s got to make hard decisions, which he didn’t have to do on TV, but he’s doing a great job.’

From the outset Bolton was wondering what he had got himself into. He found the White House in a state of chaos, with the opportunities presented by the President’s first year in power ‘botched irretrievably’, policies shaped one day and discarded the next, and everyone in the administration at war with one another. The weekly trade meetings, for instance, ‘more closely resembled college food fights than careful decision-making’.

As for the President himself, he was only ever interested in how things would play in the media. He was bombastic, ignorant, petulant and random. According to Bolton it was ‘like making and executing policy inside a pinball machine’. One of Bolton’s sharpest friends said he’d been wrong to compare Trump to an 11-year-old boy. ‘I was off by ten years.’

While he was still a television star, as host of The Apprentice, Donald Trump tried to trademark the catchphrase, ‘You’re fired!’

Trump was in the process of arranging a meeting with North Korea’s Kim Jong Un, which the hardline Bolton was dead against, hoping that ‘maybe the whole thing would collapse’.

Trump had originally hired Bolton because he liked his tough-guy, bomb-’em-all-to-hell stance on Fox TV, but, as it turned out, Trump always warmed to despots and dictators in person, particularly those who went to the trouble of flattering him. Within minutes of meeting Kim Jong Un, Trump was complaining to him about the ‘tremendous dishonesty’ of the Western press, and telling this mass-murderer that he saw him as ‘a very good person, totally sincere, with a great personality’.

Within minutes, Trump had agreed to stop US military exercises in the area, having gained nothing definite in return. Kim smiled and laughed and smiled some more. ‘Trump then pointed to Kim and said he was the only one that mattered. Kim agreed he was doing things his way, and that he and Trump would get along.’

Before they left, Trump turned to his National Security Advisor and informed Kim Jong Un that Bolton was ‘on Fox News all the time, calling for war with Russia, China and North Korea, but it was a lot different on the inside’. This, notes Bolton, ‘had all the North Koreans in stitches’. Back home in the Oval Office, Trump read out an over-the-top letter he had received from Kim Jong Un. ‘This is a wonderful letter… Listen to what he says about me.’ But the letter was pure mush. It was, says Bolton, ‘as if the letter had been written by Pavlovians who knew exactly how to touch the nerves enhancing Trump’s self-esteem’.

The same pattern occurred at every meeting with the world’s most powerful dictators: toughness instantly transformed by flattery into obeisance. President Xi of China ‘began by telling Trump how wonderful he was, laying it on thick… Xi said he wanted to work with Trump for six more years, and Trump replied that people were saying that the two-term constitutional limit on presidents should be repealed for him. Later, ‘Xi explained to Trump why he was basically building concentration camps in Xinjiang. According to our interpreter, Trump said that Xi should go ahead with building the camps, which he thought was exactly the right thing to do.’ 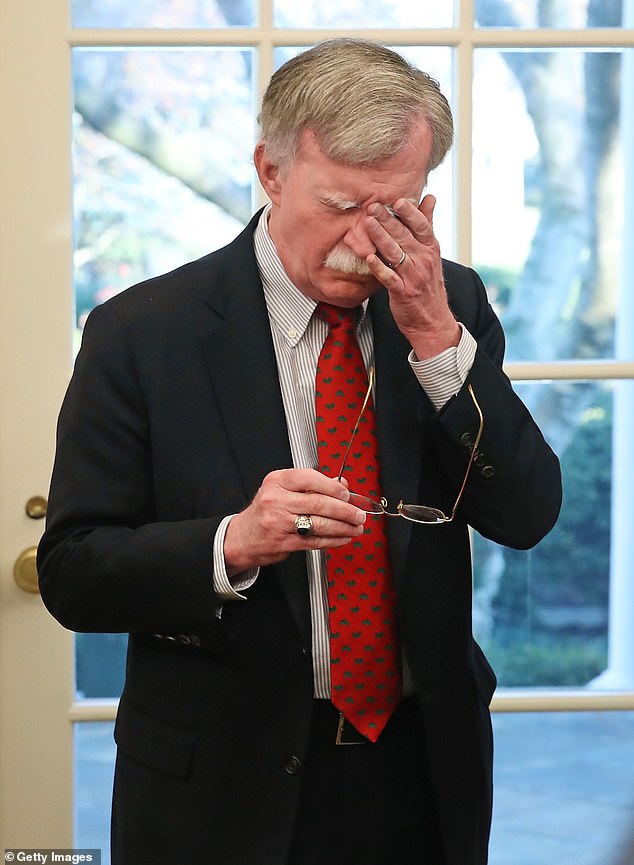 Shooting from the lip: Author John Bolton views both Trump and Obama as lily-livered surrender-monkeys

It is impossible to think of another president so willing to oil the wheels of oppression in exchange for being slathered in praise. Throughout the book Trump is forever saying that his critics in the media should be locked up, or even, in the case of CNN, executed. At the same time he never once interrupts the crafty schmoozing of Presidents Xi, Putin or Kim to complain about their multiple human rights abuses.

For Trump, everything in the universe, no matter how big or small, reflects back on Trump. ‘He couldn’t tell the difference between his personal interests and the country’s interests,’ observes Bolton. This is why, in his meeting with Xi, ‘he then, stunningly, turned the conversation to the coming US presidential election, alluding to China’s economic capability to affect the ongoing cam-paigns, pleading with Xi to ensure he’d win.’

This one sentence would, in normal circumstances, be sufficient to find Donald Trump marched off to a high-security prison in orange overalls. How accurate is Bolton’s account? He was obviously a strenuous note-taker, and he makes it clear that, but for the US government’s pre-publication review process, he would be able to quote Trump’s exact words. The artlessness of the book – there is virtually no character description, precious little drive, and he barely notices his surroundings, beyond finding Blenheim Palace ‘most impressive’ – suggests a degree of authenticity lacking in zippier narratives.

Bolton has long been a hate figure in Democrat circles. This means that they are finding it hard to embrace his criticisms of Trump with any great fervour. He views both Trump and Obama as lily-livered surrender-monkeys. But to me this makes his dismay at Trump’s vain, childish idiocies, his lack of any clear moral or political stance, all the more telling.

As a memoirist, though, Bolton is deficient, in that he never subjects his own impulses to the scrutiny he applies to others. Time and again he jots down his distaste for Trump’s words and actions – ‘I was beyond speechless’, ‘Putin had to be laughing uproariously with what he had gotten away with’, ‘I was close to walking out’ – while never quite explaining why he went along with it all, right up to the bitter end.

PIERS MORGAN: Britt Ekland told me I need to lose my ‘corona kilos’

PIERS MORGAN: Britt Ekland told me I need to lose my 'corona kilos'