The despots’ chefs who diced with death

How To Feed A Dictator

I’ll let the chef himself tell you the recipe: ‘We’d remove its innards, cut off its beard, stuff it with rice, potatoes, carrots, parsley, peas and some herbs and spices – naturally, all mixed with goat meat cut into small pieces. We’d roast it in the oven and colour it a bit, and as a finishing touch we’d stick its beard back on. It would be brought to the table in a standing position, as if it were alive. Everyone was surprised to see a goat looking as if it had come straight from the pasture but which was ready to eat in minutes.’ 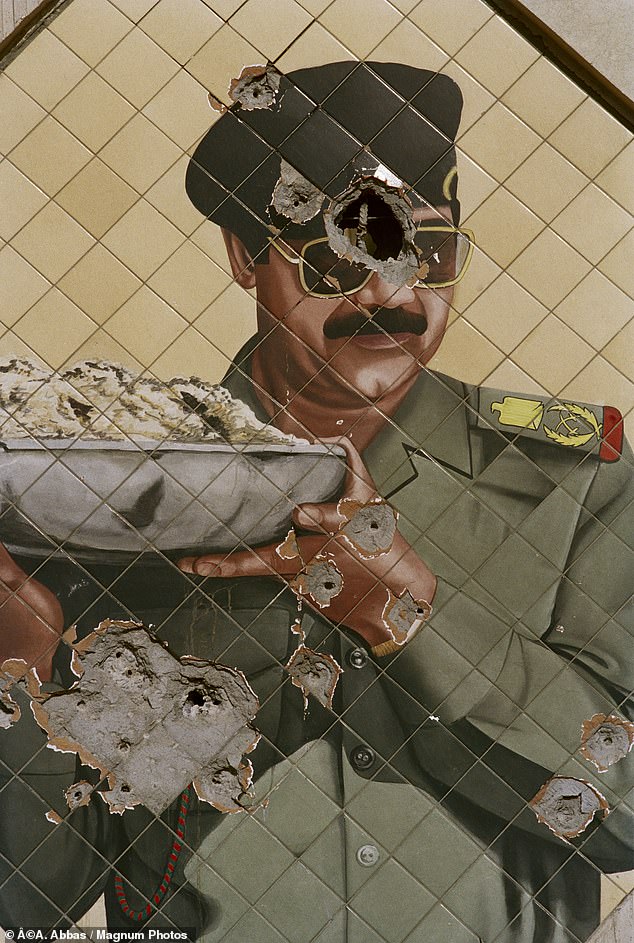 A bullet-riddled portrait of Saddam Hussein offering up a bowl of food, Baghdad, 2003

The chef in question is called Otonde Odera, and he cooked for President Idi Amin of Uganda, or, to give him his full title, His Excellency, President For Life, Field Marshal, Lord Of All The Beasts Of The Earth And Fishes Of The Seas, VC, DSO, MC, Last King Of Scotland and Conqueror Of The British Empire.

Like most dictators, Idi Amin had his little whims. He insisted, for instance, that everyone involved in preparing his food must be circumcised. Mr Odera was happy to comply. ‘The procedure took less than a minute.’

If the president particularly enjoyed a dish, he would reward his chef with an envelope full of money, or a new car. Sometimes he would even present him with a woman. Thanks to the president, Mr Odera had three extra wives. But, without warning, Amin’s mood could swiftly change for the worse. ‘We palace staff knew we were working for a madman who might get up in the morning and have us killed.’ One day, Amin’s greedy 13-year-old son Moses ate too much rice pudding, too quickly, and started having a terrible stomach ache. Amin immediately concluded that Moses had been poisoned and ran around the palace screaming: ‘If something happens to him, I’ll kill you all!’

Mr Odera nipped out the back door with Moses and drove him to the hospital. While the president’s doctor was examining the greedy boy, Mr Odera phoned the palace. ‘Everyone was convinced I really had poisoned Moses Amin and then run away, and they were all going to die because of me. So when the chief of administration heard my voice, he immediately handed the receiver to the president. Later I found out that Amin had been holding the phone in his left hand while putting a pistol to the head of one of the cooks with his right.

‘Meanwhile, the doctor was still pressing the boy’s belly, until finally the boy let out a tremendous fart. “I feel much better,” he said.’

Idi Amin was himself a cook once, a job he held while serving in the British colonial regiment, the King’s African Rifles.

The doctor told Amin that his son had simply eaten too much, and would probably continue to break wind for a while. Amin thought it all wonderfully funny, and loved reminding Mr Odera about it. But Mr Odera never found it quite as amusing. ‘If I hadn’t kept my cool and taken Moses to the hospital, I could have lost my life,’ he says.

For some years, Mr Odera had been the loyal chef for Amin’s predecessor, President Obote, but then one day when Obote was abroad for a Commonwealth summit, General Amin seized power. What should a chef do in these changeable circumstances? Mr Odera simply cooked dinner as usual. ‘Did I have it ready? Of course I did. The previous coup had taught me that generals are there for coups… Can you imagine what would have happened if Amin had spent all day carrying out his coup, arrived at the palace in the evening and found there was no supper waiting for him? He’d have given us hell.’

The Polish journalist Witold Szablowski has had the clever idea of tracking down and interviewing chefs who worked for five of the world’s most notorious dictators: Saddam Hussein, Idi Amin, Enver Hoxha, Fidel Castro and Pol Pot.

‘I started wondering what the people who cooked at key moments in history might have to say,’ he writes in his introduction. ‘Which of them liked spicy food, and which preferred mild? Who ate a lot, and who just picked at his food? Who wanted his steak rare, and who liked it well done? And finally, did the food they ate have any effect on their politics?’

It turns out that these particular topics are probably the least interesting in the book. Like so many of us, the dictators seem to have plumped for the kind of comfort food they were given as children. Pol Pot liked roast chicken, Castro liked ice cream – ‘he could eat ten scoops or more with his dinner’ – Saddam liked fish soup, and Albania’s Stalinist dictator, Enver Hoxha, had a sweet tooth.

But much more fascinating are the somersaults the chefs had to turn in order to remain in favour with their capricious bosses. For instance, Hoxha’s chef feared for his life, and rightly so, since the Albanian dictator’s two previous chefs had died in mysterious circumstances. But then he realised that his boss had been a mother’s boy, and ‘if I replaced his mother, then he couldn’t kill me’. Accordingly, he managed to persuade Hoxha’s sister to give him all their mother’s favourite recipes, and his future was assured. ‘We all cheer up if we eat something from childhood, don’t we? … Quite often he’d sit down at the table feeling agitated and get up in a good mood, joking even. Who knows how many lives I saved that way?’ 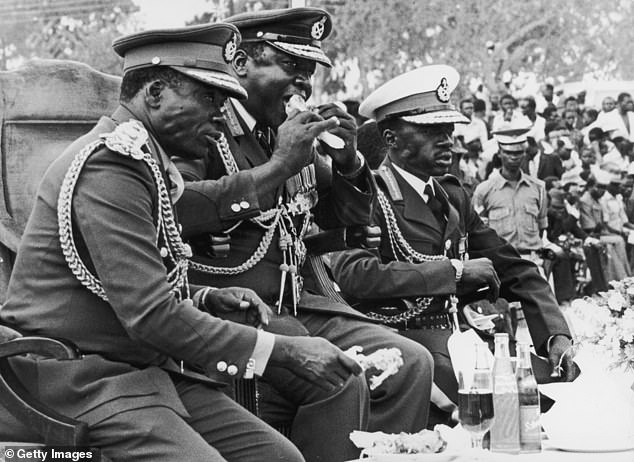 Amin tucks into a roast chicken leg in Uganda, 1978. Like most dictators, Idi Amin had his little whims. He insisted that everyone involved in preparing his food must be circumcised

How To Feed A Dictator offers a beguiling mix of the dark and the comic, combining fancy cuisine with torture and genocide. Its tone is reminiscent of Armando Iannucci’s recent movie The Death Of Stalin, in which the absurd and the monstrous, the funny and the horrifying are so entwined as to be indivisible.

Abu Ali became Saddam Hussein’s chef after catching his eye by baking him a 9ft-high birthday cake recreating ancient Mesopotamia, with the rivers made of marzipan, the animals of fruit and the waterfalls of coconut shavings.

When he was taken on, he was told to sign a confidentiality agreement. It was made clear that if he told anyone anything, he would be hanged.

He was generously remunerated, but Saddam’s rewards were almost as creepy as his penalties. Once a year he bought everyone on his palace staff a new car. Their old car would mysteriously vanish. ‘On the day the administration took away the keys to our old cars and gave us the keys to the new ones. Nobody asked you about it; you just came to work, and when you left there was a new car parked in the garage.’ 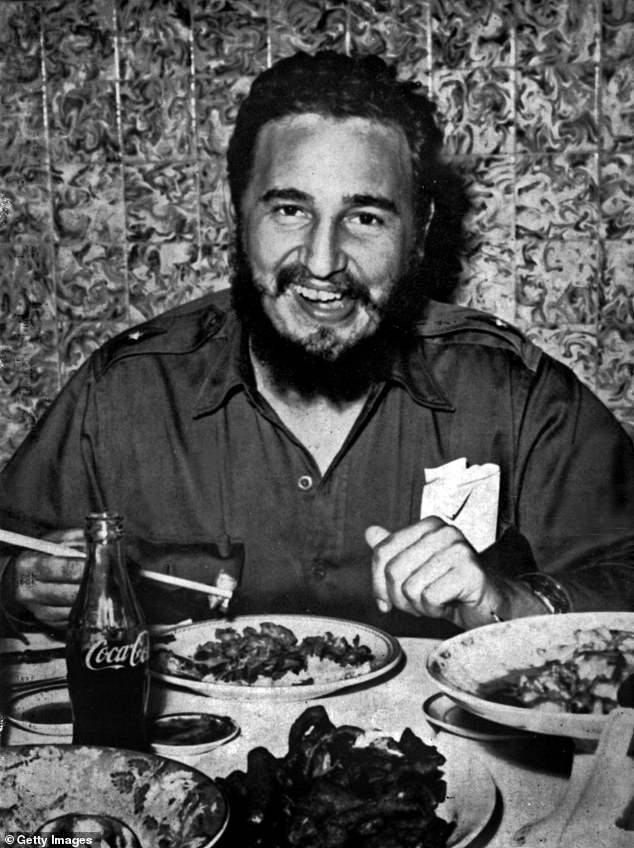 Fidel Castro enjoying a Chinese meal, 1960. Like so many of us, the dictators seem to have plumped for the kind of comfort food they were given as children

Saddam combined pride in his own culinary expertise with gross incompetence. When he went to inspect his troops, he liked to be photographed cooking for them. Abu Ali would secretly pre-cook the food, leaving Saddam to deliver the finishing touches. Things invariably went wrong as he posed for photographs. ‘He’d talk non-stop while sprinkling a whole kilo of salt into the pot. And then he’d serve the burned or oversalted rice to the soldiers. They had to eat it; after all, the president had cooked it for them.’

If ever the chef neglects to mention their dictator’s atrocities, the author judiciously supplies the facts and figures. The only chef who seems to have been blind to her employer’s failings is Yong Moeun, who cooked homely dishes for Pol Pot. She remembers his ‘beautiful smile’ and his ‘incredible sense of humour’, and fondly remembers the way ‘he dreamed of a just world’. If he had a failing, it was that he ‘trusted people too much’. It is left to Witold Szablowski to point out that the man she characterises as ‘pure goodness’ killed two million of his fellow countrymen in the space of four years.

From Will Ferrell’s Eurovision comedy to Succession & Bright Lights: The best on demand TV this week