by Gig Gossip Team
in Indie
0

After enjoying great success with three highly esteemed studio albums with Attic Lights: Friday Night Lights (2008),Super De Luxe (2013) and Love In The Time Of Shark Attacks (2019), frontman Kev Sherry is now embarking on a solo career. Kev’s songs have previously been featured on BBC’s The Culture Show, HBO’s Divorce, Netflix’s Elite, MTV’s Teen Mom, The One Show and many others. He has also collaborated with international artists including Bjorn Yttling, Cerys Matthews and La Casa Azul and his songs have been remixed by Mogwai, Camera Obscura, Jim Noir and The Vaselines. 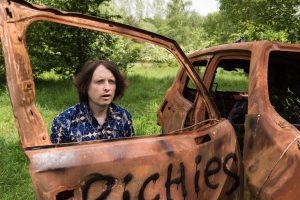 ‘Feelgood Movie Of The Year’ was written in Melbourne, Australia on a break from touring with Attic Lights, sitting on a tram looking at everyone staring into their phones instead of the incredible views of Melbourne. Kev says: “The song explores the way we present ourselves on social media, trying to remove our flaws and create almost Hollywood-like personas for ourselves – and how this ‘fakeness’ is a symptom of our wider society.” Collaborating with renowned producer Paul Savage (Mogwai, Franz Ferdinand, Arab Strap), the song was recorded using a guitar borrowed from Tracyanne Campbell (Camera Obscura, Tracyanne & Danny) and a bass guitar borrowed from Francis MacDonald (Teenage Fanclub).

Thematically the song is also linked to Kev’s anarchist journalism for New Statesman and The Alternative UK and his acclaimed feminist graphic novel Warpaint (due to be published by a legendary Franco/American company in early 2021.) Given the song is about false personas, both online and in the political/cultural world, the video heavily references the current zeitgeist:  would-be dictators and demagogues, election interference from foreign powers, data manipulation, fake political saviours who serve themselves and their billionaire overlords rather than the public offices they represent, alternative facts, climate chaos, culture wars, demographic wars, trolling…. You know the story! It is happening all around us. This is the new normal. We all need to decide which tune we are dancing to as the sands shift: are we complicit – or are we the counter-culture to usher in change?

GET THE TRACK HERE: https://kevsherry.lnk.to/feelgood

Bruce Hornsby: “I’ve never been the vehicle for your stroll down memory lane”