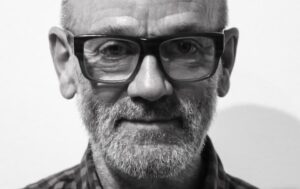 Ex-R.E.M Michael Stipe collaborates with Big Red Machine on promising new solo release; a treat for those with some affection for new things and some affiliation for the R.E.M we all know in the dark.

Humankind can always rely on Michael Stipe to make the world a better place – his voice comforting us as it calls from the modern void, hovering in the sky like giant portals to somewhere else. No Time For Love Like Now sees the ex-R.E.M frontman channeling the meditative, sedated moments not unlike the alt rock giant’s very own material; the pensive, contemplative piano-driven ballads which glisten and chime with their own distinct light – At My Most Beautiful, Electrolite, Nightswimming, Try Not to Breathe, E-Bow the Letter, Blue, Uberlin. It marches and proceeds down the streets of worn out cities where worn out people walk into the ocean; memories of lockdown, unable to lift the weights from their shoulders.

Stipe’s new song, a collaboration with Big Red Machine (The National’s Aaron Dessner and Bon Iver’s Jusin Vernon), began in 2008 and has expanded into a circuslike accumulation of various musical minds over the years. I don’t think Justin Vernon is actually featured on this tune, yet still the ideas communicated through this new tune – a combination of Dessner’s indie rock and folktronic configurations with a miniature swell of orchestration, the first release since their critically acclaimed self-titled debut in 2018 – crashes into our craniums like a whisper into the ear, with a lovely universal message; one we can all reach, and understand, with hardly anything difficult to decipher without some language barriers to break through whilst doing so. Simply put – a want for love, because love is an essential, a necessity to cut through the colophony, the rot, the noise – but sung like butter from the perspective of Stipe’s home in New York, where the views of concrete-glass skyscrapers are reduced to the worth of cardboard frameworks for a world we half-remember and which will, undoubtedly, be changed forever. In these current times, the pathways deserted, the traffic no longer tripping up the floods of people and flow of vibrant metropolitan lives, all of which impresses vividly upon Stipe’s imagination and unparalleled melodicism and always enchanting, idiosyncratic vocals, to the point where there is “no time for honey, no time for psalms and thresholds” – not when we’re caught off guard and blinded by the light of surprise as we race towards the front door, “whispering sweet prayer sighs” in thinking the world that lies behind is paved with gold and primed to excite us with its utopian complexion.

It’s a lamentation for silence; a minute to inhale, a moment to absorb what’s swirling around us, surrounding our sensory field in flames and hatred, decadence and uncertainty. A lamentation for then, a looking for elsewhere, beyond the walls, above the clouds, a eulogising of love in its purest state, a raw material we use to dress the bandages which imbue each surface of this fading, thin, old skin like small holes of smoke pockmarked on delicately woven wings. Dessner’s musicality, mainly composed of a primary palette of tender acoustic guitar, stirs and uncoils nicely, providing warmth and hue, simplistic and busy, but not overtly elaborate as a spool of impressive high-end guitarwork unreels and wraps itself around the bright, booming piano echoing in the distance. Yet a splash of atmospherics here and random glitches of spiky sounding electronics there keeps things animated, alive, and contemporary. Listen how they fizzle and bristle against the backbone of the tune, how fast they fade during a subtle dance of electronic drums, which walk along the upside of some magnetic tape, entangled and complimenting the acoustic mood beautifully, stripped back to bare essentials, with enough going on to keep us engaged, working wonders when partnered with Stipe’s husky, powerful and raw voice. There might well be no time for love, like now; but it’s a shame its a concept lost on most folk.

This is familiar for old fans, forward-thinking for new ears. It’s really Big Red Machine with Michael Stipe; as they’re the band that started the song and eventually, it found its natural home in Stipe’s bones. Given the reputation of the latter, it can’t be denied almost everyone who is a fan of the band is looking forward to some kind of solo outing by the man…Michael Stipe with…whoever. That’s something I’m looking forward to.

“Where did this all begin to change,
the lockdown memories can’t sustain,
this glistening,
hanging,
free fall”