You won’t believe what happened the other night. I went to a concert.

Laura Marling’s show at the Union Chapel was the first lockdown gig by an established artist at a leading London venue. In the normal world, 900 spectators would be packed into the polished Victorian pews. Tonight there are just 25.

It’s like Noah’s Ark, with two of each species – cameramen, directors, sound mixers, lighting designers, managers, chapel staff, photographers and critics. Take a pew? We could take three each. 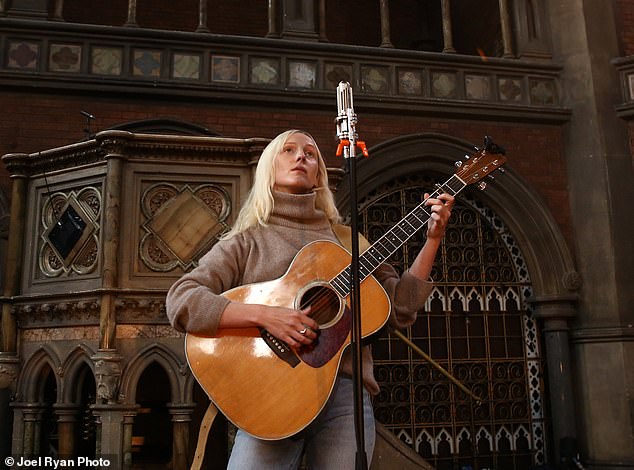 Laura Marling’s show at the Union Chapel was the first lockdown gig by an established artist at a leading London venue. Instead of the usual 900, there were just 25 spectators

Marling’s performance is witnessed by more stained-glass saints than people. But it’s also streaming live online to 4,000 fans in Britain and Europe. This is both the smallest audience in the Union Chapel’s history, and the biggest. Tickets are £12 and there’s a second show six hours later for 1,500 viewers in America, so the night’s takings are at least £66,000. Will you make a profit, I ask Marling’s manager? ‘Oh yes.’

She plays for an hour, strumming an acoustic guitar, as minstrels have for centuries. She doesn’t say a word – not even ‘Good evening’. Standing very still, feeling very present, she’s lost in her own music. Her voice rings out soft and clear.

You miss the warmth of the crowd, but there are pluses too: the setting is serene, the sound crystalline, the effect intense. The five tracks from Marling’s new album, Song For Our Daughter, confirm it as her masterpiece.

It’s a thrill to hear live music again, to feel it flowing through you. The online experience is vividly intimate. And Marling, who plans to repeat the trick with an orchestra, has given the whole arts world a glimmer of hope. I have seen the immediate future, and it works.