CRAIG BROWN: Apocalyptic loons are a staple of the Left and Right

Notes From An Apocalypse

From the beginning of time, people have been predicting the end of time. Many of today’s shrillest apocalyptic predictions echo the Revelation of St John the Divine, which was written in about 90 AD.

When I was growing up, in the 1960s, people imagined that imminent nuclear warfare would bring the world to an end.

‘One must expect a war between USA and USSR, which will begin with the total destruction of London,’ warned the philosopher Bertrand Russell in 1945. ‘I think the war will last 30 years, and leave a world without civilised people, from which everything will have to be built afresh – a process taking (say) 500 years.’ 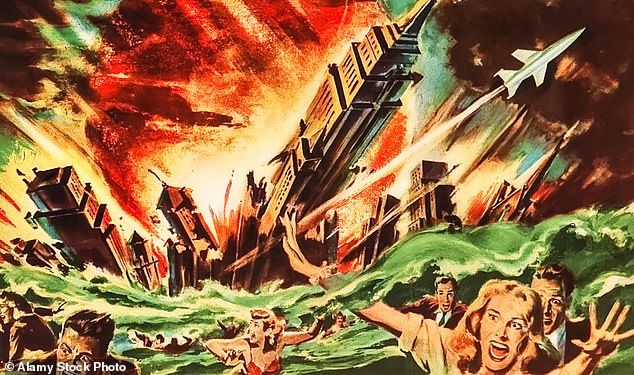 Notes From An Apocalypse , is, as you might expect, packed to the rafters with weapons-grade nutters bashing out loopy theories galore

By the end of the 1960s, London remained resolutely intact, but Russell refused to back down. ‘I still feel that the human race may become extinct before the end of the present century,’ he said in an interview in, of all places, Playboy magazine. ‘Speaking as a mathematician, I should say that the odds are about three to one against survival.’

More than 50 years on, we are still here, but people’s fears for the future remain unabated. Nowadays, climate change has taken over from nuclear war as the main focus of angst, but if you don’t believe in climate change, there are plenty of other fears to fall back on. The most extreme end-of-the-worlders in America predict a total breakdown of civilisation, with food so scarce that cannibals roam Earth. Some of them are also convinced that a planet called Niburu is on a collision course with Earth, and that the government knows all about the imminent disaster, but is covering it up.

The Irish writer Mark O’Connell is himself of a nervous and gloomy disposition. Having had a child a few years ago, he found himself ‘consumed – pointlessly, morbidly consumed – by the question of whether having brought a human being into the world was a terrible ethical blunder, given what seemed to lie ahead’. He confesses that, at one point, ‘I couldn’t sneeze without thinking it was a portent of end times’.

As it happens, authors are in the fortunate position of being able to monetise their fears. Finding himself ‘alive in a time of worst-case scenarios’, O’Connell hit upon the clever idea of tracking down today’s most vocal prophets of an apocalypse, and talking to them about the preparations they are making.

The resulting book, Notes From An Apocalypse, is, as you might expect, packed to the rafters with weapons-grade nutters bashing out loopy theories galore. Typical is Robert Vicino, a property developer who is building a post-apocalypse city out of an old weapons storage facility in the Black Hills of South Dakota. If all goes well, or, rather, badly, it will eventually be home to 10,000 people, ‘the largest survival community on Earth’.

‘There’s going to be gangs roaming. Cannibals in great numbers. Raping. Pillaging,’ Vicino tells O’Connell. ‘The have-nots coming after the haves for everything they’ve got. And my question to you is, do you want your daughters to live through that?’

TV documentary-makers such as Louis Theroux and Jon Ronson have long known that America represents the world’s richest natural source of nuttery. Setting off in their footsteps, the more dour and angsty O’Connell tempts a selection of suitably wacky types, most of them in wraparound shades, to hold forth about the end of the world as we know it.

Not that they take much tempting. The more stupid their views, the readier they are to express them. These survivalists, or ‘preppers’, are almost all fat white men who, like Donald Trump, hide their scaredy-cat dispositions behind a mask of bullish bravado.

They hark back to simpler times, when men were men and women knew their place. They distrust cities, minorities and modern life, all of which will be wiped out by the imminent catastrophe.

‘Preppers are not preparing for their fears: they are preparing for their fantasies,’ observes O’Connell, astutely. They tend to belong to a white underclass, so look forward to a post-apocalyptic world within which they become the new elite. They occupy their time by stocking up their underground larders with buckets of freeze-dried powdered foodstuffs which have a guaranteed shelf-life of quarter of a century. Happy days!

Many preppers are looking beyond Earth for their retirement communities. In Pasadena, O’Connell attends the 21st annual gathering of The Mars Society, devoted to the theme of How To Build Civilisation On Mars.

On the face of it, Mars would seem an inhospitable sort of place, a cold rock tens of millions of miles from Earth, with no sunshine, no food source, no oxygen and such a high level of radiation that everyone would be obliged to live underground. But speakers at the conference made it clear that for them, the principal benefit of life on Mars would be freedom from taxes and government controls. ‘We’re here. We’re free. You won’t have the government… saying you can’t damage this or that endangered species. Not on Mars.’

Most of those attending the conference are aged 65 or over, so, even if they packed their winter woolies and set off at a reasonable speed, they would not arrive on Mars until they were at least 124. Elon Musk has spoken of Mars as the ‘back-up’ planet, ‘just in case something goes wrong with Earth’. But when speakers at the conference talked of the kind of society they would build on Mars, it became clear to O’Connell that ‘what they were really talking about was reinventing America itself’.

O’Connell travels elsewhere in the world, but with less fruitful results. He flies all the way to New Zealand, in pursuit of all those American billionaires who are rumoured to have bought up large tracts of land for when America goes kaput, but doesn’t really come up with much. He takes a look at a stretch of countryside bought by Peter Thiel, the loopy billionaire venture capitalist who has declared that he no longer believes that freedom and democracy are compatible, but it turns out that there hasn’t been a confirmed sighting of Thiel in New Zealand since 2011. Similarly, he hears that ‘a pair of Bitcoin billionaires had bought a large lakeside estate on which they were constructing a gigantic bunker’, but it all seems very vague.

Thirty-four years after the nuclear explosion, he takes a trip to Chernobyl, which is now a popular tourist destination. In these days of lockdown, I have watched countless Chernobyl travelogues, fronted by everyone from furrow-browed Panorama reporters to knockabout comedians, and though what O’Connell says about instant ruins and disaster tourism is interesting enough, I seem to have heard it all before.

Fears of the apocalypse are by no means the sole preserve of the paranoid Right. Climate-change catastrophists are also plotting the sort of world that might emerge after the collapse of Western civilisation. Towards the end of the book, O’Connell goes on a retreat into the wilderness of the Scottish Highlands, espoused by a group called The Dark Mountain Project, who, like the preppers, are imagining the extinction of the industrial world.

For 24 hours, the participants are obliged to stay alone in a circle ten metres in diameter, staring at the clouds and the grass and the heather. O’Connell tries to extract something from it, but it all feels very effortful. ‘Something about the experience of being alone here, with nothing to do but be, and sit, and watch, and listen, had caused me to feel as though I were in some kind of relationship with the place.’ At times like these, you yearn for a redneck in wraparound shades to appear on the horizon, ready to say something daft.